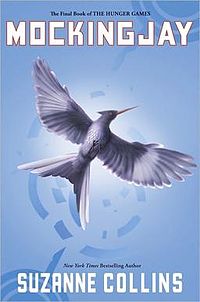 After the events of Catching Fire, Katniss Everdeen, her mother, her sister Primrose Everdeen, mentor Haymitch Abernathy, and her friends Finnick Odair and Gale Hawthorne, along with the survivors from District 12, adjust to life in the underground District 13, headquarters of the rebellion in Panem. Katniss reluctantly agrees to act as "the Mockingjay”–the symbol of the rebellion–for rebel propaganda, on the condition that District 13 President Alma Coin grant immunity to all surviving Hunger Games tributes, including Katniss's friend Peeta Mellark and Finnick's lover Annie Cresta. Coin, however, insists on flipping for Katniss's other demand: the right to personally execute Panem President Coriolanus Snow. Peeta is tortured by the Capitol to demoralize Katniss. A rescue team extracts Peeta along with the other captured victors, but discover that he has been brainwashed to fear and despise Katniss. He attempts to kill her, and is restrained under heavy guard while medics seek a cure. Finnick and Annie marry in a propaganda effort.

Katniss and Gale are sent to persuade District 2 to join the rebellion. Gale’s controversial strategy results in a decisive victory over District 2, enabling a final assault against the Capitol itself. Katniss is assigned to a squad and sent with a film crew to shoot propaganda. President Coin also sends Peeta, still dangerous and unpredictable; Katniss suspects Coin wants her dead for her lack of support and growing influence. While filming in a supposedly safe Capitol neighborhood, the team's commander Boggs is fatally wounded; before dying, he gives Katniss the team’s command. She decides to infiltrate the Capitol and kill Snow, telling her team that this was Coin's secret plan; she later reveals the lie, but the team sticks with her. In the ensuing urban warfare, many of Katniss's comrades, including Finnick, are killed. As the last of her squad reaches Snow's mansion, a hoverplane bearing the Capitol seal drops bombs among a group of children being used as human shields. Rebel medics, including Prim, rush in to help the injured children, and the remaining bombs detonate. Prim is killed, and Katniss sustains severe burns.

As she recuperates, Katniss, deeply depressed over her sister’s death, learns the rebels have taken over the Capitol and Snow is to be publicly executed. She confronts Snow, who claims that Coin orchestrated the bombing to turn Snow’s remaining supporters against him. Horrified, Katniss realizes Gale had earlier proposed a similar tactic. She becomes convinced that, rather than establish a republic governed by representatives from each District, Coin intends to take Snow's place and maintain the status quo. Coin hosts a referendum for the remaining Victors to decide whether to host another Hunger Games for the Capitol children. Although three, including Peeta, are against the plan, Katniss, Haymitch and two others outvote them.

Set to execute Snow, Katniss instead shoots Coin and immediately attempts suicide, but Peeta stops her, and she is arrested in the ensuing riot. Snow is later found dead, and Commander Paylor of District 8 takes over as president. Katniss is acquitted of murder by reason of insanity and sent home to District 12, while her mother leaves for District 4 and Gale leaves for District 2. Other District 12 natives later return, including Peeta, who has recovered his memories and his love for Katniss. She embraces him, recognizing her need for his hope and strength. Together, they write a book to preserve the memory of those who died. Though still suffering flashbacks and screaming nightmares, they manage to comfort each other.

Twenty years later, Katniss and Peeta are married and have two children. Under Paylor's administration, the Hunger Games are abolished with the arenas replaced by memorials. Katniss is beyond joyful with her new life and her family, but still carries mental and emotional scars, and dreads the day her children learn about their parents' involvement in the war and the Games. When she feels distressed, Katniss plays a comforting, repetitive game: reminding herself of every good thing she has ever seen someone do. The series ends with Katniss' reflection that there are much worse games to play.