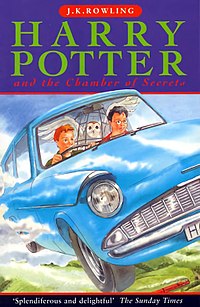 Harry Potter and the Chamber of Secrets

On Harry Potter's twelfth birthday, the Dursley family—Harry's uncle Vernon, aunt Petunia, and cousin Dudley—hold a dinner party for a potential client of Vernon's company. Uninvited, Harry, who has not been receiving any news from his school friends, is visited by a house-elf named Dobby. Dobby warns Harry not to return to Hogwarts, and has been intercepting the post from his friends. Failing to persuade Harry to not return to Hogwarts, Dobby uses magic to smash Petunia's dessert on the kitchen floor, framing Harry, who is not allowed to use magic outside school, in an attempt to get him expelled. The Ministry of Magic warns Harry against using more magic, but allows him to return at the start of the next year.

Meanwhile, as his business deal has fallen through, Vernon locks Harry in his bedroom. Harry’s best friend Ron Weasley arrives with his twin brothers Fred and George in their father Arthur’s enchanted Ford Anglia. They rescue Harry, who stays at their family home, the Burrow, for the remainder of his holidays. Harry and the other Weasleys—mother Molly, third-eldest son Percy, and daughter Ginny (who has a crush on Harry)—travel to Diagon Alley. They meet Hermione Granger, Lucius Malfoy, father of Harry’s school nemesis Draco, and Gilderoy Lockhart, a conceited autobiographer appointed new Defence Against the Dark Arts professor after the death of Professor Quirrell. At King Cross station, Harry and Ron can't enter Platform 93⁄4. Having missed the Hogwarts Express they decide to fly Arthur’s car to the school, crashing into the Whomping Willow on the grounds, and damaging Ron's wand.

Throughout the year, Harry learns that prejudiced wizards discriminate between people with “pure” blood (only wizarding heritage) and those of Muggle (non-magical) parentage. He also notices a voice only he can hear, seemingly coming from the walls of the school. During a deathday party for Gryffindor House’s ghost Nearly Headless Nick, Harry, Ron, and Hermione find the school caretaker Argus Filch’s petrified cat, Mrs. Norris, and a scrawled warning: “The Chamber of Secrets has been opened. Enemies of the heir, beware.” Rumours regarding the Chamber of Secrets begin circulatng. Harry discovers from Cuthbert Binns, the professor of History of Magic, that it allegedly houses a monster and was created by one of the school’s founders, Salazar Slytherin, after a disagreement with the other founders (Godric Gryffindor, Helga Hufflepuff, and Rowena Ravenclaw). Slytherin believed the school should exclude Muggle-born students, and built the chamber to that end. Supposedly, the Heir of Slytherin could open it and control the monster inside. During a Quidditch game, a Bludger chases Harry and breaks his arm. Attempting to mend it, Lockhart accidentally removes the arm's bones, forcing Harry to stay in the hospital wing overnight to heal. Dobby visits Harry in the night, confessing that he charmed the Bludger and sealed the gateway at King’s Cross and revealing that the Chamber of Secrets was opened before. Another attack occurs on first-year Gryffindor student Colin Creevey, giving rise to panic in Hogwarts. A duelling class is set up for the students (led by Lockhart and Potions master Severus Snape), during which it is revealed that Harry is a 'Parselmouth', having the rare ability to speak to snakes.

This sparks rumours that Harry is the Heir of Slytherin, as Slytherin was also a Parselmouth. Another attack occurs on Hufflepuff second-year Justin Finch-Fletchley and Nearly Headless Nick, fueling the rumour. Harry, Ron, and Hermione begin to suspect Draco Malfoy is behind the attacks, given his family's connections with Slytherin house and open hostility toward Muggle-born students. To confirm this, Hermione concocts Polyjuice Potion, which allows Harry and Ron to impersonate Draco’s lackeys Vincent Crabbe and Gregory Goyle. The disguised Harry and Ron interrogate Draco, discovering that Draco’s father told him little about the Chamber's previous opening, and that it occurred fifty years ago. Meanwhile, "Moaning" Myrtle Warren, a ghost that haunts a girls' bathroom provides a new clue, in the form of a diary deposited in her stall. The diary belonged to Tom Riddle, a student who witnessed a fellow student’s death when the Chamber was opened. Harry magically communicates with Riddle using the diary; Riddle claims Rubeus Hagrid, gamekeeper for Hogwarts, was to blame. When Hermione is attacked next, alongside a Ravenclaw prefect, the school is put on lockdown, and headmaster Albus Dumbledore and Hagrid are forced to leave.

Following instructions Hagrid had left, Harry and Ron follow spiders into the Forbidden Forest. They find a massive Acromantula named Aragog, a monster blamed for the attacks fifty years before. Aragog denies its involvement, and tells them that spiders fear the real monster. Although Aragog attempts to feed Harry and Ron to its progeny, Arthur's Ford Anglia arrives and helps the boys escape. Visiting Hermione, they discover that she had deduced the monster's identity prior to her attack. The monster is a basilisk (hence Harry’s ability to understand it) that kills with a stare (although no one is dead because of various devices through which they indirectly saw the monster), feared by spiders. From Aragog's hints, Harry deduces that Myrtle was the student killed in the original attack. When Ginny is taken into the Chamber, Harry and Ron discover that the entrance to it is in Myrtle's bathroom. Harry, Ron, and Lockhart enter the Chamber. The dunderheaded professor, who confesses he is a fraud, attempts to erase the boys’ memories with Ron’s damaged wand, but instead erases his own and causes a rockfall separating Ron and Harry.

Harry enters the Chamber of Secrets alone to find Ginny unconscious and Tom Riddle, who claims to be a memory preserved in his diary. Riddle claims to be the Heir of Slytherin; furthermore, his full name, Tom Marvolo Riddle, can be made into the anagram "I am Lord Voldemort". He had opened the Chamber before and framed Hagrid. By possessing Ginny through his diary, Riddle has been continuing what he started, and unleashes the basilisk against Harry. Harry shows loyalty to Dumbledore in this ordeal, which summons Dumbledore's phoenix Fawkes, who arrives with the Sorting Hat. Fawkes blinds the basilisk, allowing Harry to pull the Sword of Godric Gryffindor from the Sorting Hat and slay the creature, although he is poisoned in the process. As Riddle taunts the dying Harry, Fawkes' tears heal him, and he uses a basilisk fang to stab Riddle's diary. Both the diary and Riddle are destroyed, and Ginny is restored.

Harry, Ron, Ginny, and Lockhart return to the main castle and reunite with McGonagall, Dumbledore, and Mr. and Mrs. Weasley. Ginny is reprieved by Dumbledore, who shows interest in the diary. Lucius Malfoy bursts in, furious about Dumbledore's return. He is accompanied by Dobby, who is the Malfoys' servant. Harry realizes that the diary had been in the Malfoys’ possession. To ensure the reopening of the Chamber of Secrets, Lucius, a follower of Voldemort, had slipped the diary into Ginny's cauldron when they met in Diagon Alley. Harry hides a sock in the diary and returns it to Lucius. By discarding the sock, which Dobby catches, Lucius unintentionally frees the house-elf from the Malfoys’ service. Lucius attacks Harry in revenge, but Dobby saves him. The petrified students are cured, Gryffindor wins the house cup again, Harry and Ron receive special awards, exams are cancelled, Hagrid returns, Lockhart is discharged, and Harry returns to Privet Drive in high spirits.