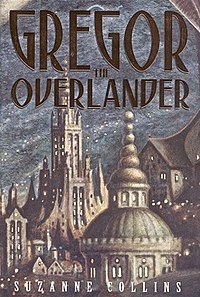 Eleven-year-old Gregor is left home alone in his family's New York City apartment to watch his sister and grandmother. When Gregor's baby sister Boots falls through an old air duct grate in the building's basement, he dives in after her. The two fall miles below into the Underland: a subterranean world home to humans with near-translucent skin; giant sentient bats, rodents, and insects; and an escalating conflict between the human city of Regalia and the rats' King Gorger. They meet several "Underlanders", among them the Regalians' crown princess Luxa, her cousin Henry, and the bats who are "bonded" to them. At first, Gregor wants only to return home, but when he is attacked by two rats during an escape attempt and saved by the Underlanders, he inadvertently brings the conflict between the two groups to a head.

It is then that he learns the real reason for the rats' hatred of Overlanders: a mysterious prophecy written by the human colony's founder Bartholomew of Sandwich hints that an Overland "warrior" will stop an attempt by the rats to take over the underground realm once and for all. The Regalian council believes Gregor to be this warrior, and tries to convince him to undertake the quest mentioned in the "Prophecy of Gray". Though he sympathizes, Gregor is reluctant to help until he learns a surprising fact: his father, who disappeared unexpectedly over two years before, had actually fallen down into Regalia just like Gregor and Boots and been taken prisoner by the rats. Gregor, his sister, and a group of Regalians go on a journey to rescue Gregor's father and recruit allies for a war against the rats.

The quest group is challenged to successfully recruit allies for the Regalians, and then journeys to find Gregor's dad emaciated and tortured in the personal prison of King Gorger. When the rat king discovers their rescue attempt, Henry reveals that he has been helping the rats all along, hoping to ally them with the Regalians and conquer the entire Underland. During the questers' attempt to escape, Gregor sacrifices himself to lure the rats' attack force — King Gorger and Henry among them — off the edge of a cliff. Henry's bat Ares, who had no knowledge of his bond's treachery, chooses to save Gregor rather than Henry as they fall. When the few remaining quest members make it back to Regalia, Luxa and her family are devastated, both because of Henry's treason and death and because Ares has been sentenced to banishment (essentially a death sentence in the Underland) for allowing his bond to die. Gregor saves his life by using his status as the "warrior" to form a new bond with him. When things have settled down somewhat and the Regalian doctors have done all they can for his father, Gregor and his family return to the surface.

The Prophecy of Gray

Beware, Underlanders, time hangs by a thread
The hunters are hunted, white water runs red.
The gnawers will strike to extinguish the rest.
The hope of the hopeless resides in a quest.

'Meaning:' The usually uneasy balance of power in the Underland is in flux, with the rats' king planning to launch an attack against the other species in the Underland. The phrase "white water runs red" refers specifically to how the humans deposit the bodies of two rats who try to kill Gregor into a fast-flowing river beneath the Regalian palace. "Hope of the hopeless" may be interpreted as a reference to Gregor, who refuses to "allow himself to think about the future at all", because it makes him sad as he has made rule, thinking if he thinks good thoughts they are never to happen. He made this rule after he lost his father. An Overlander warrior, a son of the sun,
May bring us back light, he may bring us back none.
But gather your neighbors and follow his call
Or rats will most surely devour us all. 'Meaning:' Gregor is an Overlander and the son of another fallen Overlander (thus a "son" of the "sun", in multiple ways). He brings the Regalians "light" (an Underland idiom for "life") by killing King Gorger and the traitor Henry. The humans ally themselves with the other species of their world, warding off an attack by the rats, who are carnivores and occasionally cannibalistic. Two over, two under, of royal descent,
Two fliers, two crawlers, two spinners assent.
One gnawer beside and one lost up ahead.
And eight will be left when we count up the dead. 'Meaning:' Gregor and Boots; Luxa and Henry; the bats Ares and Aurora; two giant cockroaches named Temp and Tick; the spiders Gox and Treflex; and the evil rat Ripred all journey on a quest to find the "one lost up ahead": Gregor's dad. Out of the original twelve, Tick, Treflex, Gox, and Henry all die during the quest. The last who will die must decide where he stands.
The fate of the eight is contained in his hands.
So bid him take care, bid him look where he leaps,
As life may be death, and death life again reaps. 'Meaning:' Henry, the last "quester" to die, decides that he is a traitor to the humans, and seals his fate by failing to notice as Gregor leads him off a cliff. He may be interpreted as controlling the "fate of the eight" because of his powerful connection with the rats, whom he could have manipulated had he lived. The final line may have many different meanings; among them may be a hint about how miserable Luxa is even though she lives, as Henry was her best friend until he had his life "reaped".

* 'Gregor:' An ordinary eleven-year-old boy from New York City, is meant to be the warrior mentioned in "The Prophecy of Gray". He is later bonded to Ares the flier who was betrayed by Henry. * 'Boots (Margaret):' Boots is Gregor's two-year-old sister. She accidentally discovers the entrance to the Underland. She is the only reason they decide to come on the quest. * 'Luxa:' The future queen of the Underland, about the same age as Gregor. Her parents were killed by rats shortly after Henry's. She is bonded to Aurora the flier. * 'Vikus:' The leader of the quest and Luxa's Grandfather. During the quest, he leaves them, and they have to continue the quest without Vikus' advice. * 'Henry:' Luxa's cousin, next in line to the throne after her. He wants to ally with the rats to conquer the "weak" species of the Underland. He dies chasing Gregor off the edge of a cliff, believing his bond Ares would always come catch him. * 'Ripred:' A gnawer (rat) with deadly fighting skills and intelligence; Vikus asks him to help the quest group into the rats' domain. Ripred in the later books teaches Gregor to learn how to use echolocation. * 'Temp:' One of two crawlers (cockroaches) to join the quest. He is one of the first crawlers who encounters Boots and her brother and befriends the two. * 'Tick:' A friend of Temp who sacrifices herself to save Boots from a group of rats. * 'Ares:' A large black flier (bat) bonded to Henry who chooses to save Gregor rather than his bond when the two fall off a cliff. He does not know of Henry's treachery until after the fact, and so Gregor decides to bond with him to save him from banishment. * 'Aurora:' A flier who is bonded to Luxa. She has a golden coat. * 'Gox' and 'Treflex:' Two spinners (spiders) who help the quest group. * 'Gregor's dad:' Though never named, Gregor's father is an important member of the quest because it is he the group goes to find and rescue.