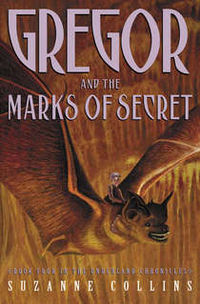 Gregor and the Marks of Secret

The novel opens with Gregor's little sister Lizzie preparing to go to camp, while Gregor and Boots head down to the Underland. Ripred introduces Gregor to the now-teenaged Pearlpelt so Gregor can observe "the Bane's" violent instability, and choose to kill him before he ends up in a leadership position. Gregor is uncomfortable with the idea. The next day, he returns to dissuade Ripred, but is instead attacked by the Bane's friends.

After several more weeks, Ripred is still missing, but Gregor remains relaxed until a messenger unexpectedly delivers Luxa her crown. Luxa and her friends know that this is a distress call from the nibbler colony in the Jungle. They investigate, but discover only a deceased mouse and an abandoned colony. Luxa is distraught, and decides to visit the nibblers' other colony at the Fount, under the pretense of going on a picnic date. This ruse leads to several others coming along as well. The group finds the colony mysteriously deserted, though they do discover a "mark of secret" which Hazard says warns of death and sorrow. The traveling party tracks the mice into the Swag, but are forced into Hades Hall by an earthquake. During their journey back to Regalia, they learn the Bane has been systematically executing nibblers, which leads Luxa to declare war against all gnawers. Gregor becomes annoyed with Luxa as the consequences of her actions become apparent.

The team eventually locates the missing nibblers, trapped by rats in a natural gas chamber, and is shocked to discover an Underland children's song describes the scene perfectly (and is thus yet another of Bartholomew of Sandwich's dreadful prophecies). A volcano starts to erupt nearby, and all rush to escape. Though one of their number dies in the explosion, the group travels sadly on until they exit the Firelands. Once there, they part ways: Gregor, Ares, and Temp going to escort the young and injured back to Regalia and spread the news of the rats' plans; the rest returning to protect and mobilize any remaining nibblers. Gregor wants to join the latter group, but Ripred convinces him to go learn about the "Prophecy of Time" and finally claim Sandwich's sword. Ripred also helps Gregor realize his new romantic feelings for Luxa, which have kept him moody and confused during their entire journey. The novel ends with Gregor accepting his role as Sandwich's "warrior" by claiming the man's sword.

The Prophecy of Secret

The prophecy in this book is carved into the walls of an old nursery in the Regalian Palace. The Underlanders take it for a popular nursery rhyme of sorts, like Hey Diddle Diddle or Humpty Dumpty. Underland children sing and dance to it at parties, as Gregor discovers in the early chapters of the novel. The song's "true" meaning is unknown until the mass death of a group of nibblers, when Boots's dancing mimics the terrifying scene perfectly. It was dubbed the "Prophecy of Secret" by Aurora.

Dancing in the firelight,
See the queen who conquers night.
Gold flows from her, hot and bright.

'Meaning:' During this part of the children's song, dancers select one girl to be "the queen" and dance in the center of their circle. When the quest members assign it a different meaning, they decide this verse talks about a large volcano, and the light it gives off in the dark tunnels.

Father, mother, sister, brother,
Off they go
I do not know
If we will see another 'Meaning:' This section is repeated at the end of every verse, and refers to the fact that entire families of nibblers are being executed by the gnawers. As the rats hope to exterminate the mice once and for all, it is truly unlikely that anyone will ever "see another" Catch the nibblers in a trap.
Watch the nibblers spin and snap.
Quiet while they take a nap.

'Meaning:' The nibblers are being herded into a pit at the base of the volcano, which is spewing some form of asphyxiant or toxic gas. As the gas (which is denser than air) is blown towards the mice by the currents, it settles into the pit and is breathed in by the nibblers. They start to writhe on the ground in search of clean air, and finally grow still as they are suffocated and die. The mice appear to be napping (according to Boots), which is one of the first clues that leads the quest group to reinterpret this children's song.

Now the guests are at our door
Greet them as we have before.
Some will slice and some will pour.

'Meaning:' The final verse was once taken as a description of a tea party, and was accompanied by dance moves miming slicing cake and pouring tea. Once the quest groups "translate" the lines, they are taken to describe the war with the gnawers that Luxa has recently initiated. The Regalians are fully prepared to resume hostilities "as [they] have before". Luxa explains to Gregor that, in times of war, the Regalians attack their enemies with swords and burning oil poured from high places.