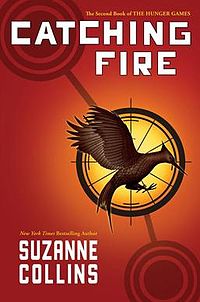 After winning the 74th Hunger Games, Katniss Everdeen and Peeta Mellark return home to District 12, the poorest sector of Panem. Six months later, prior to Katniss and Peeta's "Victory Tour" of the country, President Snow visits and tells Katniss that her televised acts of defiance in the previous Games have inspired rebellion among the districts. Snow demands that Katniss convince the country that she was acting out of love for Peeta, not against the Capitol, or her entire family and best friend Gale Hawthorne will be executed. Katniss reveals this threat to her mentor, Haymitch Abernathy, but not to Peeta.

The tour’s first stop is District 11, home of Katniss' Hunger Games ally Rue. Peeta announces that he will give part of his winnings to the families of Rue and fellow tribute Thresh, and Katniss delivers an impromptu, heartfelt speech expressing her gratitude to the fallen tributes. An old man salutes Katniss, joined by the crowd; to her horror, the old man is immediately executed. Katniss tells Peeta of Snow’s threat, and they continue the tour as normal. Hoping to placate Snow, Peeta proposes to Katniss during a televised interview in the Capitol. Katniss accepts, but Snow is dissatisfied with her performance, leaving her fearing for her loved ones.

Returning to District 12, now overrun with harsher Peacekeepers to enforce the Capitol's rule, Katniss discovers an uprising has broken out in District 8. Gale is caught poaching and is whipped in the town square until Haymitch intervenes. While hunting in the woods, Katniss meets Bonnie and Twill, refugees from District 8 whose uprising has failed. They plan to reach District 13 – believed to be destroyed in the first rebellion against the Capitol – in the hope that the residents are actually underground. Katniss is injured climbing back over District 12’s now live electric fence. Preparing for her upcoming wedding, Katniss learns that Districts 3 and 4 have also risen up against the Capitol.

The Capitol announces the 75th Hunger Games, with a twist – tributes will be selected from the surviving victors of the previous Games. Katniss realizes she must compete alongside either Haymitch or Peeta. Haymitch is chosen and is unable to stop Peeta volunteering in his place. At the Capitol, Haymitch urges Katniss to find allies but she bonds with the weakest tributes. In the televised interview, Katniss' stylist Cinna transforms the white wedding gown Snow insisted she wear into a black dress of feathers resembling a mockingjay, a symbol of the rebellion. Before Katniss is sent into the arena, she watches helplessly as Cinna is beaten unconscious by the peacekeepers.

Katniss and Peeta ally themselves with Finnick Odair from District 4 and Mags, his 80-year-old mentor. Peeta is knocked out by the jungle arena’s force field, and the party later has to flee from a poisonous fog. Mags sacrifices herself to allow Finnick to save the weakened Peeta. Katniss and Peeta allies with Johanna Mason from District 7 and “exceptionally smart” Beetee and Wiress from District 3. Wiress says that the arena is arranged like a clock, with each danger occurring at a fixed time and place for one hour. However, Wiress is killed, and in retaliation Katniss and Johanna kill the tributes of District one's victors. The remaining tributes work on Beetee's plan to harness lightning to electrocute the District 2 tributes, who later interferes and disrupts the plan. Katniss uses her bow and arrow to direct the lightning into the force field, destroying it and knocking her unconscious.

Katniss wakes up in route to District 13 with Finnick, Beetee, and Haymitch. She learns from Haymitch and Plutarch Heavensbee, the Head Gamekeeper, that there has been a plan to rescue Katniss, now the living symbol of the rebellion. Peeta, along with Johanna and tribute Enobaria, have been captured by the Capitol. She later learns from Gale that, though her family and some other residents have escaped, District 12 has been destroyed.